The Beatitudes through the Ages 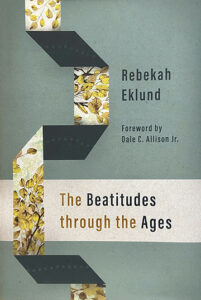 The Beatitudes, I wrote in Preaching Truth in the Age of Alternative Facts (Abingdon Press, 2018), has become a political document. Nothing like “Blessed are the poor in spirit” to set the church on fire. We will not even consider how “Blessed are the peacemakers” is received, let alone Luke’s “Woe to you who are rich.”

Rebekah Eklund, Th.D., Duke Divinity School, and Associate Professor of Theology at Loyola University in Baltimore, would not be surprised. She has written a tour de force that helps us put contemporary responses to the Beatitudes in a historical context. The Beatitudes through the Ages is a marvel of scholarship – the bibliography runs to 45 pages, and the footnotes take a fourth to a third of most pages. But do not let that put you off because it is a delight to read.

What the book is not, however, is a commentary on the Beatitudes. Instead, as Eklund writes in the Introduction, it is a work of
reception history – she even throws in Wirkungsgeschicte – that is, “[A]n exploration of a text’s ‘effects’ as it has traveled through history…. It’s interested in what effect the text has had on individual readers, on communities like churches and towns, and on societies – and what effect those communities have had, in turn, on the texts and their readers. How has a text like the Beatitudes functioned when it has been read by particular people, in specific social contexts, at certain points in history?”

That this is not a commentary does not mean it lacks insight into the meaning of the Beatitudes. That insight comes by considering, beatitude by beatitude through 10 chapters, how those who came before us read, understood, and applied these seminal words of Jesus to their lives, offered in confidence that we can learn from Tertullian and Origen, Calvin and Luther, Bonhoeffer and (gulp) Augustine.

(It is worth noting that her cast of characters is almost exclusively male and European; such is the nature of reception history.)

Perhaps the most significant value for preachers is the treasure trove of stories we read about along the way, stories that will enliven our sermons and provide instruction in the tradition. For example,

Hendrik Niclaes (ca.1501-1580) was a merchant and a mystic. A native of Germany, he spent most of his life in Amsterdam and Emden (northwest Germany today), where he established a religious order called the Family of Love. In his meditation on the fifth beatitude (“Blessed are the merciful”), written to encourage his beloved Family, he repeated the phrase “stretching out the hand” over and over again. He described mercy as stretching out an open hand with food for the poor, with loving hospitality, and with forbearance and forgiveness. It is a gentle phrase that captures the wideness of the term mercy in the beatitude and elsewhere in Scripture (p. 171).