Lay Preachers Rock it at Roslyn for Inaugural Event 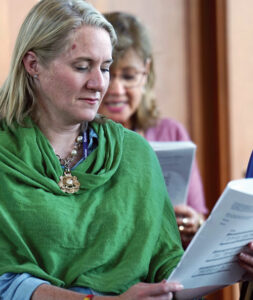 Jessica Walker, a program participant from the Diocese of the Central Gulf Coast.

Lay preachers-in-training spent their time in small groups sharing sermons for feedback from peers and trainers, as well as worship and fellowship. Plenary presenters Joe Swimmer of The Episcopal Parish Network and lay preacher Debby Stokes of the Diocese of Southern Ohio spoke thoughtfully from their different perspectives of the growing role of lay participation in worship and in the life of the congregation. It was hardly surprising from the enthusiasm evidenced all weekend that two extremely polished and powerful sermons were delivered by lay trainees in the program.

The spirit of the gathering was one of excitement and joy. New relationships were built connecting dioceses across the country, and it is clear that these preachers will be supporting each other for years to come as they live into their call to share the Gospel. 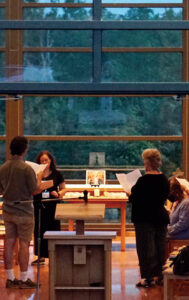 Members of the Lay Preacher Training Initiative during worship in the
chapel at the Roslyn Retreat Center in Richmond. Photo by Kay Wild.

Funded by a grant from Trinity Church, Wall Street, the Lay Preacher Training Initiative is a new endeavor of the Episcopal Preaching Foundation. Currently offered in six pilot dioceses, LPTI is a two-year local training program to form lay people into effective, confident preachers so that they can share God’s word and how God is moving in their own lives and communities.

Responding to the needs of a changing Church, EPF’s new program builds on its 35-year history of offering annual preaching conferences to seminarians and clergy. LPTI is designed to equip and empower lay leaders within the Episcopal Church. Learn more about LPTI.

The Rev. Mariclair Partee Carlsen is the Communications Director for the Lay Preacher Training Initiative.