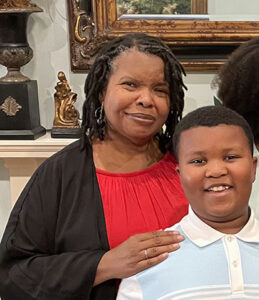 Nikki Mathis with her son, Ethan.

In 2008 seminarian “Nikki” Mathis received the EPF Preaching Excellence Award at Sewanee, University of the South School of Theology, and attended the Preaching Excellence Program (PEP) offered by the Episcopal Preaching Foundation (EPF). In 2009 she was invited back to join the EPF faculty, and she has continued to be, except for several years to see her son Ethan through his infant and toddler years. Last year she served as Co-Leader of the online PEP-II conference.

Nikki grew up in Augusta, GA, where as a teenager, she and her family became Episcopalians. She earned her MSW/LCSW and, as a social worker, served in Augusta, Atlanta, and Athens, GA. She was a counselor in conflict mediation, crisis intervention, foster care evaluations, and client advocacy— to name a few. She also recruited, trained, and supervised volunteers.

After several years of discernment, Nikki was accepted as a postulant in the Diocese of Atlanta, entered The School of Theology, Sewanee, TN, and graduated with an MDiv in 2008. While at Sewanee, she was Student Body President, reporting to the Board of Regents and Board of Trustees, and student liaison to faculty. After her ordination, she was Associate Rector at St. Paul’s Church, Atlanta, as part of the staff of future bishop Robert Wright.

In 2011, The School of Theology, Sewanee, invited Nikki to be Associate Dean responsible for oversight of community life. In 2013, she returned to the Diocese of Atlanta, where she is now rector of St. Gregory the Great, Athens, GA.

“Preaching is a major part of the priest’s ministry,” opined Nikki. “Preaching requires finding your authentic voice, identifying and honing your skills, and having fun. It also means finding colleagues who can critique your sermons, bolster your confidence, and burnish the rough edges.” After a short pause, Nikki continued, “This is what I try to model and communicate to the participants of PEP.”

The Rev. Nikki Mathis is rector of St. Gregory the Great, Athens, Georgia.