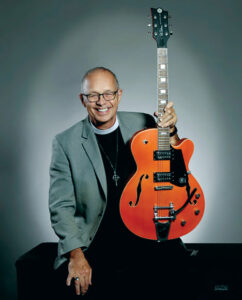 The Rev. Dr. Stephen Smith has a consistent record of providing leadership to Churches that face a multitude of challenges. He recently retired as rector of St. Patrick’s Episcopal Church in Dublin, Ohio, where he successfully expanded programming and significantly increased congregational participation. Rev. Smith spent 37 years in parish ministry serving in small towns, an industrial town, and a large suburban congregation. He was consistently noted for his preaching and preached at Diocesan Conventions, Clergy Conferences and Ordinations. In two congregations, he developed feedback groups with parishioners to help strengthen his own preaching and educate participants on the process of preparing sermons.

His publications include Saving Salvation: The Amazing Evolution of Grace (Morehouse: 2005) and numerous articles and sermons for Forward Movement Publications and others. He is now under contract to contribute to a preaching resource from John Knox Publications, specifically on preaching during Holy Week. Rev. Smith holds a D.Min. in Preaching from the School of Theology at the University of the South, Sewanee, TN (the same institution that granted his M.Div. in 1988). He has an undergraduate degree in Journalism from Ohio University.

Currently, Rev. Smith serves as coordinator for the EPF’s Lay Preacher Training Initiative: an effort funded by Trinity Church Wall Street to create a pilot program for training lay people as preachers. The pilot program was rolled out in six dioceses at the beginning of 2022 and will continue through 2023. Upon completion, the curriculum will be fine-tuned based on feedback from participants and made available to any Diocese to utilize in training lay preachers.

Rev. Smith has served the Episcopal Preaching Foundation in many capacities for over 15 years. He has been on faculty for conferences, preached at conference worship services, offered workshops on preaching and chaired the Preaching Excellence Program (PEP).

Though his triathlon days are over, Smith remains an avid bike rider and exercise enthusiast. In addition, a couple weekends each month he plays guitar in a classic rock and roll band for fun. The name of the band? Revdup.